Kingscote was owned by George Nobel Jones, and then several generations of the King family (who obviously gave it the name). The home was built in 1841 but substantially enlarged in the 1880s for the Kings. The original house was designed by Richard Upjohn, and the addition was by McKim, Mead, and White. 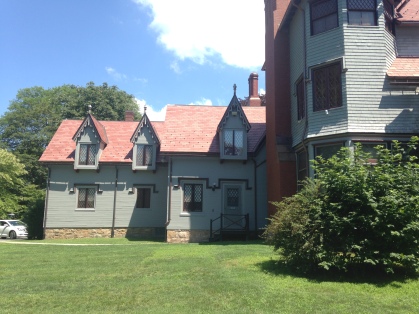 One wing of Kingscote. The exterior is being restored, so scaffolding prevented me from photographing the whole thing. 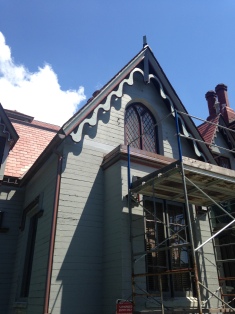 Some of the exterior details (and scaffolding).

Kingscote is large and impressive, but not so much that it’s impossible to imagine yourself living here. The first-floor rooms are very dark, decorated in a busy Victorian style. The King family was Victorian in the extreme. They collected tons and stuff and displayed it everywhere! Unlike at many other Newport homes, the family’s collections, including their Hudson River School paintings, are still with the house. The second floor is lighter in tone than the first floor, still busy but quite cheerful. 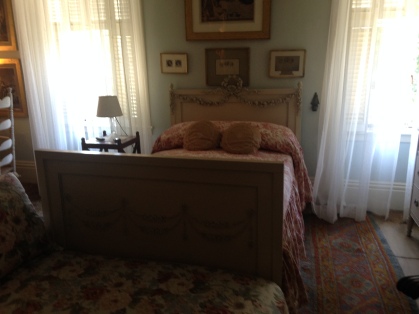 A cozy bedroom at Kingscote. Apparently, the house had different bedrooms for warmer and cooler weather. Not a bad idea, if you ask me!

A lovely dresser in one of the Kingscote bedrooms.

The pointed arch motif is even carried through to the door panels, which are painted in cheerful tones not typical of the Gothic Revival. 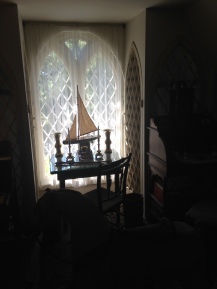 By far, the house’s highlight is the dining room, which was designed by Stanford White. It has detailed woodwork with chrysanthemum details, a cork ceiling, and early Louis Comfort Tiffany stained glass. The house is Gothic Revival in design, and I love the way the pointed arch motif was worked into so many little details of the house, such as chair backs and door panels.

Some of the lovely stained glass at Kingscote.

This impressive, Italian-Renaissance-inspired chair can be found in Kingscote’s sitting room. 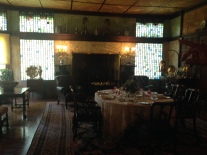 Kingscote’s dining room, designed by Stanford White with Louis Comfort Tiffany stained glass, is a big highlight of the house. Two big features – the cork ceiling and the detailed woodwork – unfortunately aren’t visible in this picture.

Processing…
Success! You're on the list.
Whoops! There was an error and we couldn't process your subscription. Please reload the page and try again.