While I was in Asheville to visit Biltmore, I paid a visit to the historic Grove Park Inn. The hotel, now the Omni Grove Park Inn, opened in 1913 as a health resort. In the 19th and early-20th centuries, people often visited Asheville because they hoped that breathing in the mountain air would be good for their health. There were other hotels for this purpose in the area, but The Grove Park Inn became the most famous. It was built by Edwin Wiley Grove (1850-1927), who made his fortune by inventing and marketing a tasteless quinine medicine that he called Grove’s Tasteless Chill Tonic.

The hotel was built in an Arts and Crafts style, and the lobby has a rustic feel with two massive fireplaces and lots of rough-cut stone. The Omni has expanded the hotel significantly, but the historic part is still the core of the building. At the back is the large, covered “breathing porch” where turn-of-the-century patients would sit to take in the mountain air. It’s now an open-air restaurant, with a breathtaking view of the mountains. From there, a series of terraces and waterfalls lead down to the partly-underground spa building. 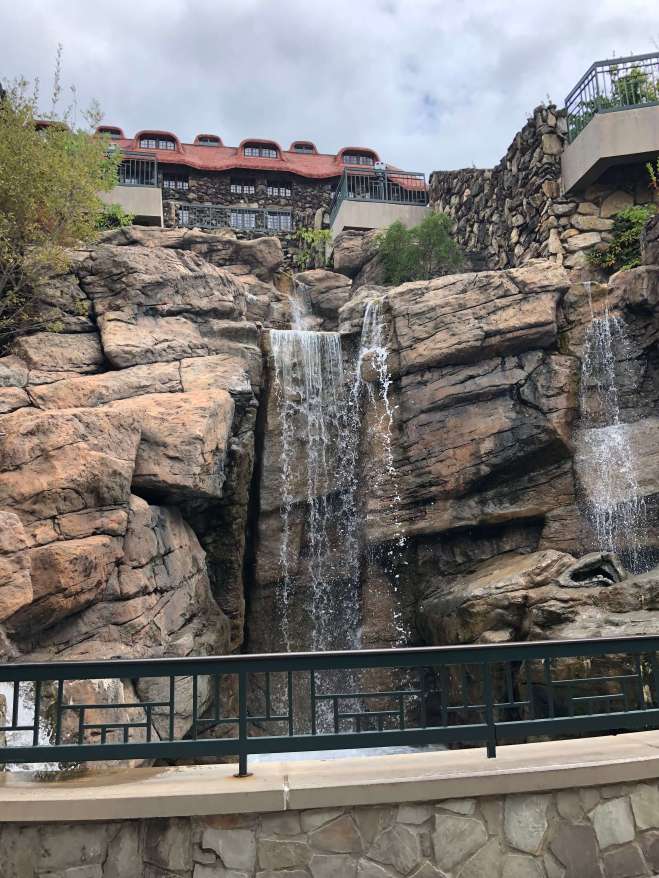 Elbert Hubbard and the Roycrofters, his New York state-based Arts and Crafts community, decorated the interior. The lobby is filled with Arts and Crafts-style light fixtures, rugs, simple wooden furniture. I particularly liked the hammered copper planter boxes with the initials “GPI” as their only decoration. I don’t know how many are originals, but you can see obviously original chairs and other pieces from the hotel’s history in glass display cases throughout the lobby.

The Grove Park Inn now has several shops and restaurants. We bought our lunch at a small coffee shop in one of the newer additions and then ate out on one of the terraces.

Click here to read about the rest of my experience at Biltmore and its environs.