Today’s prompt told me to write stream of conscious for at least 15 minutes in order to develop a habit of writing every day. The topic I was given was to write about three songs that affect me and how they make me feel. I did the assignment and was pleased with what I wrote, but I decided against posting it because I don’t think that any of my readers will care much how being a performer makes me interact with music differently than other people do. But then I realized that all I need to do is change music to visual art and I have THE PERFECT POST for this blog. So I saved the music post to my computer and started this second post. At first, I was going to choose three random pages in my art history textbook and write about whatever art was on those pages, but the works I ended up with made me feel nothing, so I just scrolled (not that you can scroll in a book) and picked three things that caught my eye. I will how write a short something about each one of them. It’s like the tests I used to have to take as an art history major, where I would be given works of art and I had to write everything I knew about them for a certain amount of time, except here, I don’t have to worry about being factually correct or whether what I wrote “goes beyond the purely visual information that anyone would know my looking at the picture” as my professors used to say. The prompt said absolutely no editing, but I did go back and fix the really obvious typos and spelling errors, because I have standards, and I don’t want to publish something with misspelled words. I didn’t change anything else, though, so odd word choices and strange sentence structures are all the way they appeared in my head. Oh, and speaking of professors, I know at least one of mine from college reads this. So, to her and any other art historians who are reading this, I hope you can overlook any errors here. Please understand that the point is to get me writing. I promise I haven’t forgotten everything you taught me! So, I have picked the following three items, and I will write for about five minutes on each one of them:

1. Rembrandt. Self-Portrait. 1658. Oil on canvas. The Frick Collection, New York. Yay! I have seen this work in person, and I studied it in school, too. I really love Rembrandt’s outfit here. That golden yellow is an amazing color. I seem to recall that Rembrandt really liked costumes, so he used to keep a costume stash in his studio for himself and his models to wear so that they could look like Biblical kings or whatever he needed them to be. I have a costume stash too, so that’s cool. Rembrandt looks very Shakespearean here, to me. I imagine he was in one of the Henry plays or something like that. Rembrandt is old here, too. I know that’s obvious, but looking at him, I start to wonder how aging would affect his habit of making self portraits. I know that Rembrandt was a big fan of painting himself, as were some other artists like Durer. Would growing old make you more or less likely to want to paint yourself? Would you portray yourself as a different sort of person, and how would that make you feel? I love Rembrandt’s use of light, as well, here but also in all of his work. The light illuminates the costume much more than his face. You think of self portraits as being from a place of hubris, to a certain extent, because you are just propagating your own image. However, placing your face in shadow is pretty far from hubris. It makes me feel that the character Rembrandt was portraying here was more important to him than the fact that it’s his face on the character. Maybe he liked to try on different characters (I can relate), and that was really what the self portraits were about.

2. Equestrian Statue of a Carolingian Ruler, 9th century, Bronze. Musee du Louvre. I’ve seen this in person, too. Yay! In fact, when I first visited the Louvre, I had a list of things I HAD to see, and I made darn sure that I saw each and every one of them, no matter how tired I was or how badly my feet hurt. The funny thing way, many of the things I had on that list were there because I had studied them in my first art history classes, and it became monumental to me this idea that I would see them in person. I have a very vivid memory of being shocked by how tiny this little guy was. I rem ember my professors telling me that you can’t tell scale from the slides we used to look at, and I don’t think that concept really hit me until I saw this statue at the Louvre. What I love about it, no matter the size, is the shiny perfection of it. I mean, for such a little thing, all the surfaces are smooth and well-finished, and all the little details are there. There’s something almost personable about the ruler on horseback. For some reasons, memory told me that he was Charlemagne, but clearly I’m mis-remembering. There’s this interesting red patina on the top surfaces of the horse and rider, and I love it because it ads a sense of life to the statue. Not that horses or French rulers typically have red on them for no apparent reason, but it makes the metal seem more organic and more lifelike, somehow. I also wonder about the orb in the man’s hand. If I read the text, it would probably say something about that, like a badge of kingship, but if I stop to research we all know this post won’t be finished.

3. Temple of Ramses II at Abu Simbel. 19th Dynasty (1200s BC). Egypt. When I opened to the first photo of this temple, I thought for a second that it was a picture of the Buddhas in Iraq that were destroyed in 2001. I felt horrible about even considering it for this exercise until I realized that it was a different monument entirely. One thing I’ve always loved about Egyptian architecture is its monumentality. Other cultures have produced some pretty grand stuff, but the Egyptians knew how to make things not just imposing but also solid. Another image shows these massive statues in a colonnade in the temple. They look like massive bearded gnomes. I’m sorry. That’s not very scholarly historian of me, but it’s true. Why did I never notice that before? All the sandstone is beautiful. (I hope I got that right; again, I can’t look it up.) I want to imagine what it would be like to walk through that hall of columns, each one depicting a massive pharaoh, but I don’t feel like anything I’ve ever experienced is enough like it to base my imagination on. It’s so interesting how every pharaoh depicted in Egyptian art looks so much like all of the others because it wasn’t important for the pharaoh to look even remotely like himself. It was only important that he look like Pharaoh, in the general sense. Even women were depicted with beards because pharaohs are depicted with beards. I guess that means that we have no idea what any of these people actually look like unless we have their mummy by some chance. 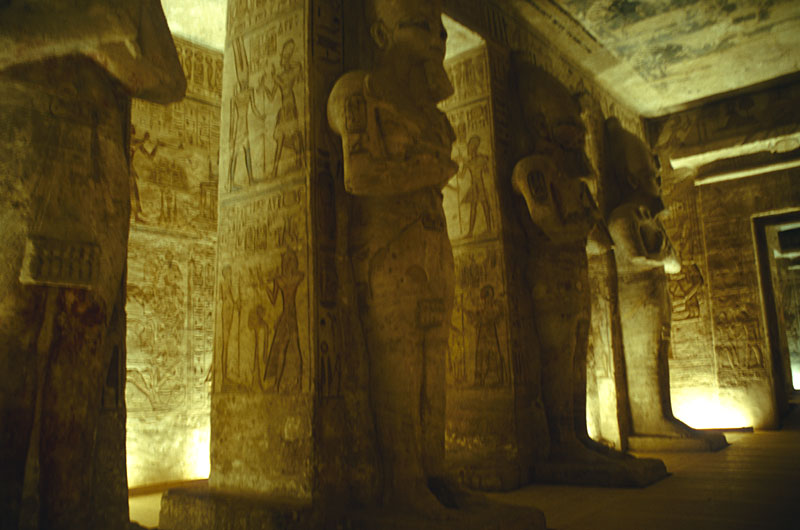 Alexandra Kiely, aka A Scholarly Skater, is an art historian based in the northeastern United States. She loves wandering down the dark and dusty corners of art history and wholeheartedly believes in visual art's ability to enrich every person's life. Her favorite periods of art history are 19th-century American painting and medieval European art and architecture. When she not looking at, reading about, writing about, or teaching art, she's probably ice dancing or reading. View all posts by Alexandra Kiely (A Scholarly Skater)

Processing…
Success! You're on the list.
Whoops! There was an error and we couldn't process your subscription. Please reload the page and try again.